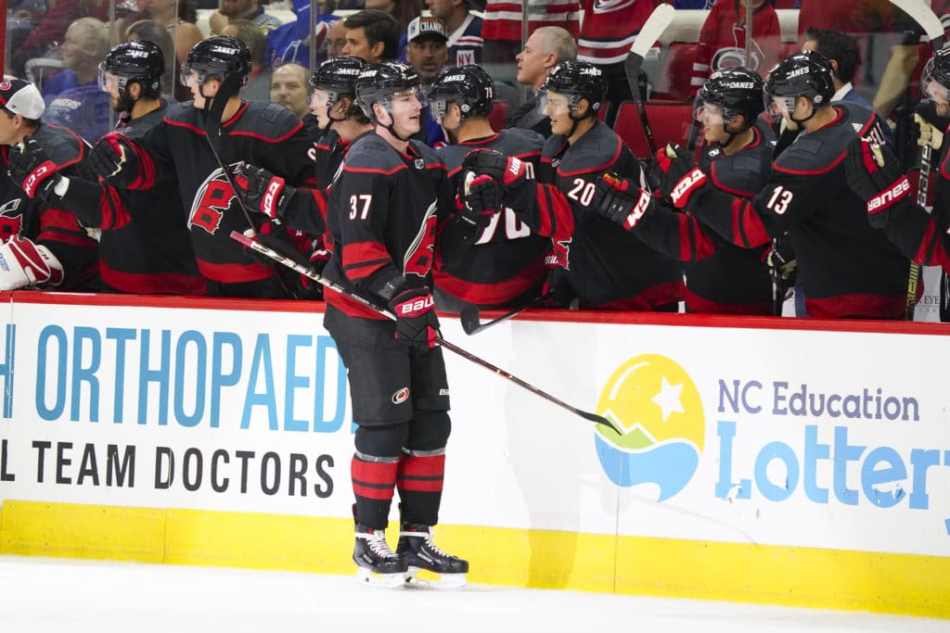 Andrei Svechnikov is the most naturally talented and complete hockey player the Canes have ever drafted, in my lifetime at least. Even more so than Eric Staal. I still remember sitting and refreshing my phone every ten seconds as the Canes moved up in the draft lottery. It was surreal watching us move from eleventh all the way up to second overall. It was an incredible stroke of luck that helped solidify the 180 degree turnaround the franchise so desperately needed.

Svechnikov is the kind of player that the Canes have been missing for so long. He’s a game-changing power forward with a wicked shot, incredible vision and senses, and good defensive zone awareness to boot. Now, there are other rookies that have hit the ground running harder than Svechnikov. It seems every rookie is chasing Vancouver’s Elias Pettersson for the NHL’s best rookie this season. That’s totally fine. In the long run, I think Svechnikov will prove to be the best forward in this draft class.

After posting his seventh multi-point game (2 g 1 a) of the season versus Colorado last Monday, it became apparent that Svechnikov had arrived for good. He had been looking better all season, but in Colorado he was the best he’s looked all season, period. He needs to be talked about not because he deserves Calder Memorial Trophy recognition but because of the steady strides he’s taken to improve his game.

His steady improvement hasn’t gone unnoticed by Coach Brind’Amour. While Svechnikov is only averaging 14:35 of ice time a game, those minutes are becoming increasingly important, and he’s being placed in situations to succeed. Look at the timing of the goal he scored Saturday night against Buffalo. It’s 1:07 into the second period, the time when you need to set the tone. Now look who assisted it; Teravainen and Aho. When I saw Svechnikov hop over the boards with those two, I cried tears of joy. It’s something I could get very used to seeing.

Coach Brind’Amour had this to say about Svechnikov in his post-game presser on Saturday night.

“We’re relying on him a lot and he’s playing big minutes. You can’t rely on a player unless he’s going to be responsible, and he has been.” He said. “He’s still learning every day, but he’s going to be a really really good player in this league for a long time.”

I’ve seen some incredible displays of talent out of Svechnikov this season, and the timing feels right to reflect on his growth and why Canes fans should be excited for the foreseeable future.

Before showing off his skill while he has the puck, I want to highlight what I think is his greatest improvement, staying out of the box. At one point earlier this season, he was one of the top 5 most penalized players in the league. To date, he has 56 penalty minutes (PIMs), all in the form of minor penalties. It is my opinion that his discipline saw the most improvement after the all-star break, so that’s where I’ll do my splits.

Before the All-Star break, Svechnikov had accrued 46 PIMs (23 minors) in 50 games. That was good for 0.92 PIMs (or 0.46 minors) per game. After the All-Star break, Svechnikov turned the tide dramatically. Since then, he only has 10 PIMs (5 minors) in 21 games. This translates to 0.48 PIMs (or 0.24 minors) per game. Additionally, for Svechnikov, minor penalties would come in bunches. Before the break, he had 5 games in which he took multiple penalties. Since the break, he has only 1 such game. 1 multi-penalty game in 21 tries is a much nicer ratio than 5 in 50.

What I’m getting at here is that Svechnikov has taken his coaches’ lessons seriously. His problem earlier in the season is that he wasn’t keeping his stick on the ice, which led to lots of stick infractions. Being a rookie, he’s going to get the “rookie calls.” Anything close and he’d find himself in the sin bin. Because he has learned to keep his stick on the ice, he is more frequently on the ice and in position to take advantage of his rare combination of size, speed, and hands. So, let’s get into that.

Just to remind you, this kid is only eighteen. Let’s start with his shot. Svechnikov has a lethal wrist shot. The specific shot below is one with strength you would expect from a 24-year old NHL pro, not an 18-year old. Watch his hockey IQ take over as he crosses over with Wallmark. That subtle cross over creates the shooting window by enlarging the gap separating Svechnikov and the defender. Svechnikov then has the presence of mind to use the defender as a screen, thus making the shot harder for the goaltender to track. Svechnikov saw the slightest of windows and he placed his shot through the defender’s legs and under the cross bar on the short side. Perfection.

Next, let’s look at his skating ability. What makes Svechnikov so dangerous is his strength and balance while driving the net. It’s something he does many times per game. He’s not afraid to lower his shoulder to take the puck to the house, or go to the dirty areas. Here, he burns Shea Weber (defender) and Carey Price (goalie) in the same play. They’re both considered great at their respective positions. As if the speed and edge work wasn’t enough, the puck control and backhand finish in tight quarters complete this clip. It’s just nasty. You can tell he knew he was taking it all the way to the house while he was still at center ice. He was (literally) two steps ahead of Montreal’s back end.

It’s not just his wrist shot that’s good. Though we don’t see it often, he has a heck of a slap shot too. Check out this clip from preseason where the shot velocity nearly knocks the net off its moorings. Svechnikov has the senses to jump in on Wallmark and Di Giuseppe’s (now with the Milwaukee Admirals (AHL)) cycling play. Tampa’s goaltender expects Di Giuseppe to finish the play, but the puck is dropped to Svechnikov for the one-timer. He makes no mistake. I mean, just look at that leg kick! I love this shot because it strikes me as an utterly disrespectful cannon from 5 feet away, just like you would in EA Sports NHL 19 to assert your dominance.

And finally, take a look at this play he makes in transition. It starts inside his own blue line where his presence on the back check aids in causing a turnover. He picks up the loose puck and has the acceleration needed to generate a threatening three-on-two. He looks Wallmark’s way, but has the vision and senses to know that Martinook is joining the play as the trailer and puts the puck right in his wheelhouse so he can rip a dangerous shot from the high slot. This pass isn’t even close to Svechnikov’s best this season, but it was his first NHL point, and it showcases his ability to play in all three zones.

The Hurricanes are incredibly lucky to have been able to draft Svechnikov. He’s going to be a key part of the franchise moving forward. What should scare the rest of the league is that he is growing game by game, in all areas. He may not have exploded on to the scene like some were expecting, but let’s remember that he is playing under a rookie head coach who was also learning alongside him at the start. Over time, Svechnikov has only earned more trust and and ascended up the depth chart. Right now, he’s listed on the second line with Teravainen and Staal.

Svechnikov has 33 points so far this season, and his 18 total goals is third among rookies behind Vancouver’s Pettersson (27) and Toronto’s Johnsson (20). With 11 games left to play this season, I think a 20-goal rookie campaign is absolutely in the realm of possibilities for Svechnikov. I also think 20+ will become a norm for him as he continues to improve.

Steady improvement has been the Canes’ calling card this season, and Svechnikov has epitomized it. I can see it now. Some day, I’ll be sitting down eagerly refreshing my social media and waiting for the announcement.

“And the winner of the Hart Memorial Trophy for the player most valuable to his team, from the Carolina Hurricanes, Andrei Svechnikov.”