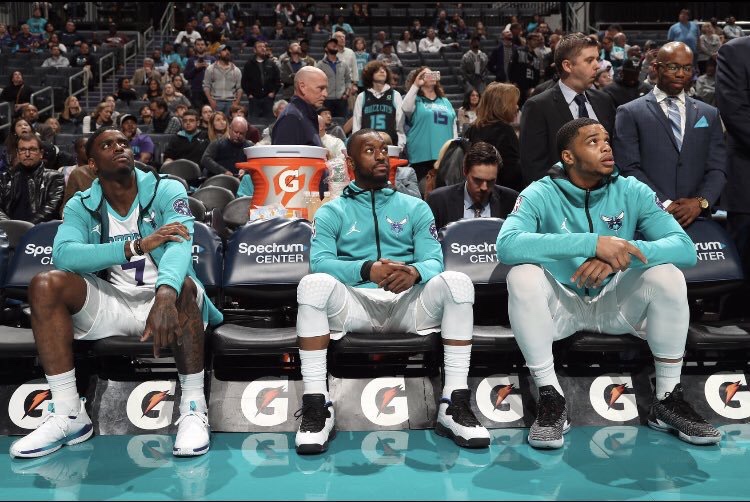 At the time of writing this, the Charlotte Hornets are 1.5 games out of the playoffs and have just eight games remaining in the regular season. The club is currently playing its best basketball of the year at the most opportune time as they are on a four-game win streak which includes back-to-back-to-back wins against the Boston Celtics, Toronto Raptors, and San Antonio Spurs; all of whom are playoff teams.

Each of those games played out differently and showcased the Hornets newly found ability to win games in a multitude of ways. The Hornets overcame a 19 point deficit in their home affair against the Celtics. Toronto was a back and forth game where each club exchanged a double digit lead at some point in the game capped off by a miraculous Jeremy Lamb half-court heave. And most recently, the Spurs contest featured a battle from start to finish that resulted in a nine point overtime victory for the guys in purple and teal.

All year I was rooting for making the playoffs. It was only until recently (before this hot streak) when the club was an atrocious 31-39 I was convinced by the other members at Queen’s Guard to hop on the pro-tank wagon. Then the Hornets do this to me. Strap in and tighten your seatbelt, the Hornets’ chase to the playoffs will be an intense ride.

The Hornets begin the final eight games with a four game west coast road trip (is it really a four game west coast road trip when one of those games is at New Orleans? Why are the Pelicans in the Western Conference?). Tangent aside, they will face the Los Angeles Lakers, Golden State Warriors, Utah Jazz, and finally the Pelicans. Playing away from home hasn’t exactly been thrilling for Charlotte this season as they currently sit at 11-24, which is good enough for the eight worst record on the road in the league.

The Lakers are plummeting, and luckily it is a Friday night game which means Charlotte will not have to face the undefeated #LANightLife, which makes the game even more winnable for the Hornets. So let’s jot this down at a win. (36-39)

Then they travel to the Bay for a showdown vs the defending champion Warriors. We aren’t winning this game, sorry. As previously mentioned, the Hornets are terrible on the road, Golden State is traditionally exceptional at Oracle Arena AND they are currently fighting for the 1 seed with the Denver Nuggets. Hold this L, gentlemen. (36-40)

Immediately following the presumed smackdown by Golden State the team will travel to Utah to face the Jazz. The Jazz are one of the hottest teams in the league winning seven of their last ten, but they are not the team they were last season. However, Utah did beat the Hornets in Charlotte earlier this season. The Hornets did not lead at all during any point of that game. This feels like a coin flip game, but coming off of a SEGABABA I find the odds not in the good guys’ favor. (36-41)

Finally, Charlotte caps off their road trip with a game against New Orleans. This game, like the Lakers game, is winnable. The Anthony Davis saga has left the star player playing in very limited minutes and as a result, the Pelicans are one of the worst teams in the league. Coming off of a presumed two game losing streak, this feels like a must win game for the Hornets. (37-41)

The Hornets return to Spectrum Center for a home game vs the Toronto Raptors. The Raptors have a good grip on the number two seed in the East and are unlikely to catch Milwaukee for the one seed. It might be possible that Toronto rests Kawhi Leonard that game as they prepare for the postseason. Additionally, Charlotte has proved to be much better at home than on the road. (38-41)

Are you ready? Are you ready for chaos? Because this is where it gets fun and terrifying! The Hornets will then travel up to Detroit to face the Pistons who currently hold the seventh seed sitting at 37-37. This is a pivotal game for both teams trying to secure one of the last playoff spots in the Eastern Conference. The Hornets have dismantled the Pistons three times this season. Hopefully they can make it four. (39-41)

From Detroit the Hornets will move a few hours East to face the Cleveland Cavaliers. The Cavs have been playing very well as of late, even if they are not necessarily winning games. Rookie Collin Sexton has found his rhythm in the NBA and the return of Kevin Love has been a welcomed addition for the wine and gold. This feels like a trap game and simultaneously a must win for the buzz. Anyone have a paper bag I can blow into? (40-41)

I am being dead serious when I say this, after writing that last paragraph my stomach hurts because I’m already nervous as the Hornets will face the Orlando Magic in Charlotte to cap off the regular season. To be honest, this entire three game span is going to give me a stroke. Orlando currently holds the last spot in the Eastern Conference playoff picture and are one game ahead of the Hornets who hold the tiebreaker of the series. The purple and teal’s postseason lives could very well come down to the final game of the regular season. The good news is that we have destroyed Orlando twice already this season; let’s make it a third shall we? (41-41)

Needless to say, the final eight games of the regular season will be stressful. However that is the joy (and terror) of rooting for an average sports team. Every single game is meaningful from here on out. If all goes well and my predictions hold true then the world will be restored to perfect balance just in time for the postseason and Avengers End Game. #ThanosTeam

0 comments on “Strap In: The Hornets Wild Ride to the Postseason”