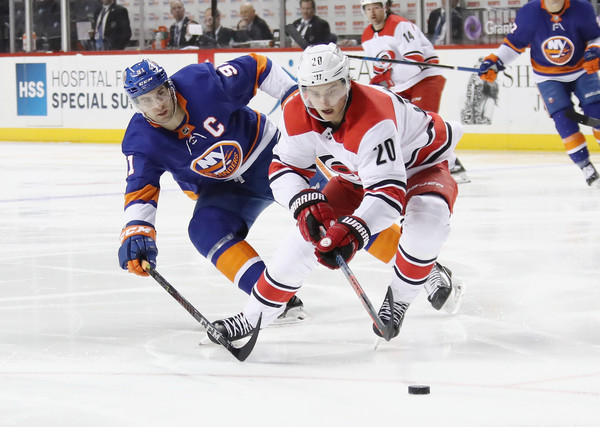 Well, I’ll be honest. I wasn’t confident that I’d be back with a round two preview for the Canes this postseason. Yet, here we are! Led by a balanced offensive attack, defensive contributions, some unsung heroes, Petr Mrazek’s brilliance, and the undying willpower of Coach Brind’Amour and captain Justin Williams, the Canes dethroned the defending champs in seven grueling games. I was left looking skyward wondering out loud, “Did that really just happen?”

As I watched the beginning of game seven, I worried that we had run out of gas. But, this is the 2018-2019 Canes we’re talking about. This team is never out of it. They never quit. As soon as Jordan Staal beat Holtby high on the blocker side to tie the game in the third period, I knew the Canes were going to find a way. That’s how the game felt. Everyone watching knew the Canes were going to advance. It was just a matter of when they would seal the deal. They were hungrier, faster, and more determined to win, especially in the late stages, on Wednesday night. The Canes are going to have to carry that same work ethic and tenacity into round two because it doesn’t get any easier going forward.

Our opponents, the New York Islanders, swept the Pittsburgh Penguins in round one and have been idle for well over a week now awaiting their opponent. The Canes on the other hand just played on Wednesday. Some believe too much rest can be a bad thing, and I certainly think it can be for the Canes. They usually didn’t play well after having 3+ nights off during the regular season. So with the quick turnaround time for the players in mind, let’s do a crash course on what to expect for Canes-Isles in round two of the Stanley Cup Playoffs!

It might sound insane if we consider preseason predictions made for the Canes and Isles, but it’s very possible that the winner of this series goes on to represent the East in the Stanley Cup Final. These two teams share a calling card of strong defense. On paper, Carolina’s blue line is better than the Islanders blue line. The Canes have four dynamic defensemen that accrued 25+ points in the regular season, and are led by 6’ 3” Swiss army knife, Jaccob Slavin. The Islanders have a trio of promising 24-year old defenders in Adam Pelech, Ryan Pulock, and Devon Toews. A lot will be asked of that trio since they will be without backend veteran Johnny Boychuk. He suffered a leg injury back on April 16 and could miss anywhere from half to the entire second round.

Defense isn’t just limited to defensemen, however. Forwards and their positioning play a key role in own-end efficiency. That’s how the Islanders so swiftly removed the Penguins from the postseason. The Isles play a suffocating defensive system and rarely, if ever, make mistakes in their own zone. Their forwards are always back checking, and they’re always supporting the defensemen by taking away opposing skaters’ time and space in the high slot and at the point. They are infuriatingly precise with their coverage and patient with the puck on breakouts. In the regular season, they allowed the fewest goals against (191, or 2.33 goals against per game). In their entire first round series, the Isles let up a total of six goals to an offense consisting of Sidney Crosby, Evgeni Malkin, and Phil Kessel. That’s absurd. If we view the defensive matchup in terms of offensive production potential, advantage Canes. If we view it in terms of systematic, defensive team play, advantage Islanders.

As for the last line of defense, Petr Mrazek has been nothing short of amazing for the Canes. There’s not much that needs to be said other than he’s clutch and in his zone of late. Don’t take the crease from him. For the Isles, it’s worth mentioning that Robin Lehner, their likely starting goaltender, is a Vezina Trophy finalist this season for the league’s best goalie. In 46 games played in the regular season, he posted 25 wins with a save percentage of .930 and a goals against average of 2.13. Those are excellent numbers. Pittsburgh couldn’t find a way to break him, so his confidence is flowing. Should the Canes manage to crack Lehner, the Isles have Thomas Greiss waiting in the wings. He has been very steady versus the Canes. Goaltending favors the Isles heading into round two.

If you are a new fan, and you like high-flying and scoring affairs, this series is might be like having teeth pulled while playing chess to you. Neither of these teams dazzle offensively. They look to grind out wins and capitalize on their opponent’s mistakes. It will likely trend toward grinding, low-scoring outcomes. In the regular season, the Canes went 1-2-1 against the Islanders. Two of those games ended with the Canes on the wrong side of a 2-1 score. In the other two meetings, the victor potted four goals. So, offense is possible in this series. Especially if you consider that the Canes just never quit. The Canes won’t change their offensive identity of cycling and throwing a high volume of pucks on net. To that end, it will be exciting. It’ll just be waiting for one of those second or third chances to actually beat the brick wall known as 2018-2019 Robin Lehner. It’s going to be a fast, but also methodical meeting of ideologies that preach, “sticking with it” and taking care of their own zones first.

Warren Foegele (LW) – 4 g 2 a – The rookie has arrived. He thrives in big moments and will continue to do so. He’s shooting at 33.3% so far this postseason.

Jaccob Slavin (D) – 0 g 9 a – Slavin had himself a series against Washington. He is tied with Erik Karlsson of San Jose for the playoffs points lead amongst defensemen. He’ll continue to be a workhorse at both ends of the ice.

Jordan Staal (C) – 3 g 3 a – Watch out. Jordan Staal has tasted postseason competition again. His shutdown two-way game and knack for game-tying and go-ahead goals alike will be valuable.

Robin Lehner (G) – When you type in “brick wall” on Google, a picture of this guy comes up. I don’t know if this is true, but let’s pretend it is. He had a phenomenal regular season, and it has continued into the postseason.

Jordan Eberle (RW) – 4 g 2 a – He’s got good hands and has found his scoring touch at the right time. He accounted for nearly one third of the goals scored by forwards in the Isles first round. The Canes will have to box him out at the front of the net.

The Islanders were able to break the psyche of a usually dominant postseason Penguins team with their nearly flawless defensive scheme. The Penguins showed signs of frustration, and ultimately, that led to fewer quality chances and the team mailing it in for the season.

The Canes are not the Penguins. This team has no off switch, and even in double OT on Wednesday night they weren’t showing many signs of slowing down. The Canes have proven to be a team that has only gotten better and more tenacious with each playoff game that passes. Of course, the Isles saw the Canes play style in the regular season, so they’re ready for the volume of shots. The question remaining for the Isles is if they can weather the storm that is Justin Williams’ will to win and his young guns that have completely bought in to what he and Coach Brind’Amour are selling.

It will be a matter of making the simple play and taking care of the puck for the Canes. They can’t afford to make mistakes in their own zone because the Islanders thrive off of and will convert on defensive zone lapses. The Isles aren’t an offensive juggernaut like the Caps, but they are the definition of opportunistic.

The Canes, having just taken down the defending champs, are battle-tested in the playoff atmosphere and growing in confidence. I’m guessing that two games will require overtime and neither team will score more than three times in any given game. I’m also calling at least one game-deciding goal for Canes’ defender Calvin de Haan against his former team.

For Carolina, the sky is the limit. Led by Justin Williams’ sheer willpower and old man strength, the Canes will advance to the Eastern Conference Finals in 6 games.

0 comments on “Playoff Preview Round 2: Canes vs. Isles”