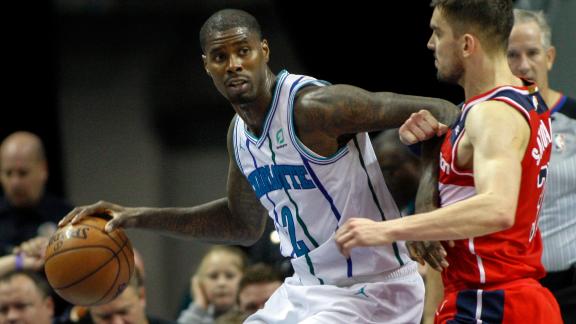 Marvin Williams’ 2018-2019 season was stable, yet un-impactful. That’s the best way I can describe it. He appeared in 75 games this season which was third most on the team only behind Jeremy Lamb and Kemba Walker. He also started in all 75 of those games as well.  Williams was one of the few players who never fell out of the rotation this season. While his play may not have necessarily dictated his starting minutes, his veteran status and value was seen as an asset in the mind of first year head coach, James Borrego.

Based on the the eye test alone, Williams did his job and met the standards for your average NBA role player. He knew his role and he did it to the best of his ability. Williams’ job this season was to provide veteran leadership to the young players on the roster and contribute to the game via his shooting ability, defense, and understanding of the game. But that’s the issue, Williams, like many role players, are incredibly streaky players. Marv missed more open shots than he –and we– would have liked to seen. Which was unfortunate given how much pressure other team’s sent at Kemba Walker this season which lead to many open shots for the Hornets’ wings.

Williams’ game suits that of a role player on a championship contending team. Role players on those teams have the luxury of fading into the background while the stars carry the load, and step up when given the opportunity. As we all should know by now, the Hornets are not in that position. Charlotte needed contributions from their rotation pieces game in and game out, and at 32 years old, Williams is not built to do that anymore. There is no real specialty or true aspect to his game. Marv is considered a shooter, but didn’t shoot well this season. He’s a decent defender. He’s not a playmaker. He’s just there and fades out rather unnoticeably on the court.

Marvin was given plenty of opportunity to produce. He played twenty or more minutes 69 times this season and in 33 of those games he played more than thirty minutes. Going a step further, of his 75 games played, he scored less than ten points 35 times (46% of the time). That can’t happen to your starting power forward, or starting anything. Luckily for him, Nic Batum got all the heat from fans this season and took the blow away from Williams.

Marvin went out with a toe injury during the final five games of the season as the team was pushing for the final playoff spot. The Hornets went 4-1 in those games, getting steady contributions from Miles Bridges, Dwyane Bacon, and Frank Kaminsky in his absence.

Williams will be returning to Charlotte next season after he opted into his *gulp* $15 million player option for the 2019-2020 season. Hopefully he will get his stroke back next season, and we can discard this one entirely.