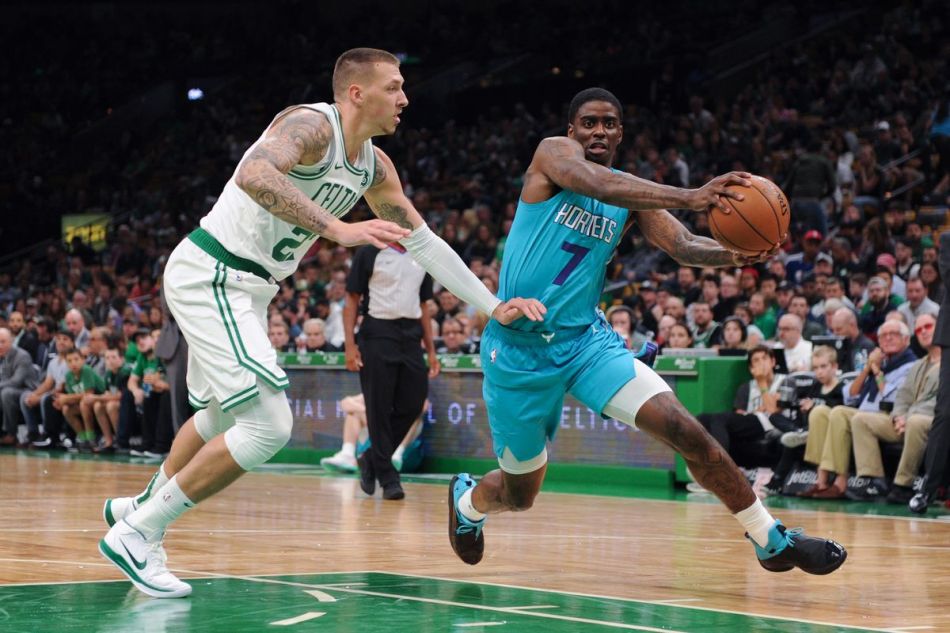 Most of the time when you’re a rookie in the NBA you’re playing with house money in a sense. Anything you do well gets celebrated, but nobody is ever really too concerned with your mistakes since you’re a rookie after all, growing pains are expected.

That was basically the case with Dwayne Bacon last year. When he played it was great to see him show flashes of potential, but there were still no expectations. Going into year two is where you really start to expect players to begin having an efficient impact on the court, and Bacon did that in basically every single facet.

At the start of the season Bacon’s playing time wasn’t very consistent and it began to seem like he was just the odd man out of the rotation. It was strange to see that because when he did play at any point prior to the final 18-game stretch to end the season (in which he played in every game), he was scoring the ball well at the very least.

In a very small sample size over the first twenty five games he played, he shot 52% from both the field and beyond the arc. These obviously weren’t sustainable numbers, but to be able to do that with inconsistent run is still worth noting. For a team that struggles to get consistent scoring from anyone not named Kemba Walker, it was only a matter of time until Bacon was given a bigger role.

Those are pretty impressive numbers for a guy playing in a meaningful role for basically the first time in his NBA career. Remember, despite not making the playoffs, this Hornets team didn’t get eliminated from contention until the last day of the season.  It’s not as if Bacon was out there playing in garbage time minutes while the team was trying to lose.

Much of the talk about Bacon amongst Hornets fans is about his ability to score the ball, and rightfully so, but my favorite moment from Bacon this season came on the defensive end.

Up 112-111 against the Washington Wizards on March 8th with 11 seconds remaining, Coach James Borrego decided to sub Cody Zeller out for Dwayne Bacon.  He made the right choice.

With the clock winding down, Bacon was matched up with All-Star guard (and future Hornet…), Bradley Beal. Beal drove from the baseline with seconds remaining, spun into the lane, and went up for the shot. Except Bacon was there, in his face the entire time, and forced a miss to seal the win.

We’ve now seen Bacon can score, but if he becomes a plus-defender as well he will be able to take his game to another level.

What Was Most Impressive

When you look at Bacon’s season in its entirety, the most impressive thing about it absolutely has to be how he shot the ball from beyond the arc. In his rookie campaign, he shot 25.6% from the three. His second season? 43.7% (38/87), which was the best percentage on the team.

Over the course of an entire season of consistently playing I would expect that clip to drop some, but I’d be very surprised if Bacon became less than a 35% three-point shooter.

Unlike last season as well, where 100% of his threes came off assists, that number was 73.7% this season (second lowest on the team behind Walker).  To clarify, there’s nothing wrong with making threes off assists, it just adds another dimension to Bacon’s game if we’re beginning to see that he can also create on his own.

Some guys spend their entire careers trying to develop a shot from range, so for Bacon to be able to significantly improve in that area in just one season should leave Hornets fans excited, even if slight regression is imminent.

What Needs to be Improved

Bacon’s FG%, 3P%, eFG%, TS%, Player Efficiency Rating, all of it, improved from season one to season two.However, one area that still needs improving is mid range shooting. When Bacon came into the league, some people had mentioned that he tended to lean towards taking contested twos vs. threes, which just isn’t always an efficient way to play.

He had the best shooting percentages on the team both at the rim, and beyond the arc, but only shot roughly 30% in the middle ground. It’s difficult to tell if Bacon simply isn’t great at shooting from mid range, or if it’s the inefficient mid range shots bringing that percentage down, but either way, that’s the main thing Bacon needs to work on to continue becoming a complete scorer.

Given what Bacon was asked to do and the role he was thrust into, it’s hard to justify giving him a lower season grade than this one. Hornets fans are buzzing to see him play next season and my personal hot take that I will leave you with is this. If Kemba Walker leaves the Hornets in Free Agency, Dwayne Bacon will lead the Hornets in scoring next season.