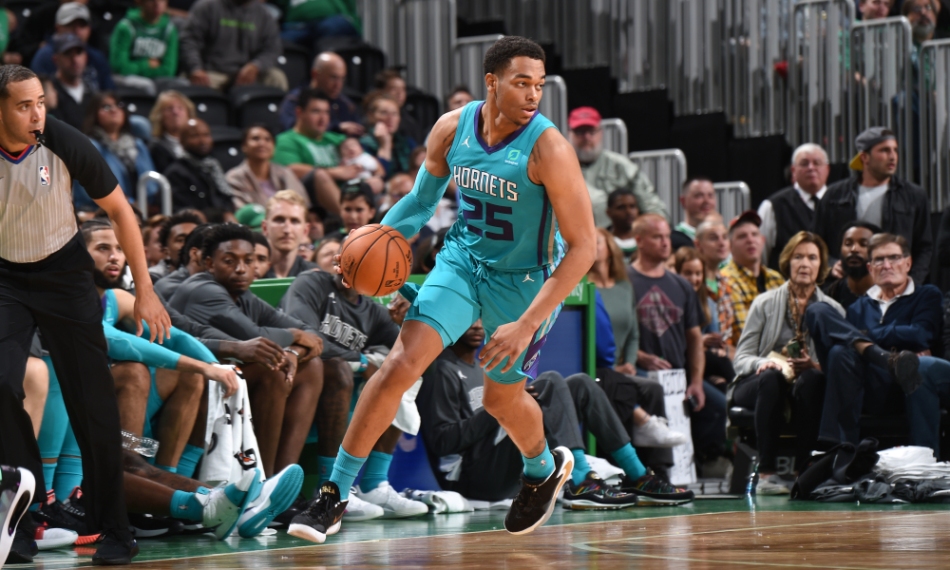 When PJ Washington was picked by the Charlotte Hornets many fans felt disappointed and some just felt apathetic. To many, PJ Washington is a an extension of the Hornets’ history of drafting players who aren’t very exciting. Fans would have probably been happier with a Kevin Porter Jr. or a Bol Bol. A player with a potentially very high ceiling.

I think some of the lack of excitement for PJ is trying to figure out what it is that he does that will transfer to league. Did the Hornets just draft a 6’7.5 traditional Center? If you go watch PJ’s highlights you might think they just drafted a shorter Al Jefferson, but PJ has many translatable skills besides post-ups and that’s what I want to show in this article.

PJ stands at 6’7.5″ with a wingspan of 7’2.5″ and weighs 230 lbs. He ironically measures similar to fellow Charlotte Hornet, Marvin Williams, who is 6’8″ with a 7’3.5″ wingspan and weighs 237 lbs. These are great measurements for a power-forward in the NBA. The height is about average, but the wingspan is a great asset. PJ definitely has a strong frame that is NBA ready. For all intents and purposes I think it’s helpful to imagine a guy Marvin’s size when thinking about PJ in the league.

PJ’s touch is nothing short of elite.

Show cased in his signature hook over the left shoulder.

PJ uses a combination of his strength and body control (the touch doesn’t hurt either) to finish at the rim:

PJ’s major offensive skill in college was his ability to score from the post. And in general, PJ excelled at scoring at the rim. It is evident that PJ for a variety of reasons such as touch, strength, right handed hook-shot, body control, and length has a knack for it. PJ ranked in the 70th percentile in post-ups on 131 possessions according to synergy scoring .901 points per possession.

Eventually teams got tired of him scoring, so they sent double teams when he posted-up. Kentucky scored 1.532 points per possession off PJ’s passes out of the post. You can’t stop PJ in the post, and you can’t double-team PJ in the post.

PJ is also an impressive driver. He scored .962 points per possession on runners on 26 possessions which were 7.9% of his total possessions.

PJ is also an impressive driver.

Icing on the cake, PJ is a very adept passer while driving to the basket.

Here’s a bonus clip of PJ making a very good pass to the weak-side corner with his left hand out of a pick-and-roll:

PJ is an intelligent cutter. He ranked in the 60th percentile on cuts according to synergy scoring 1.254 points per possession on 59 possessions.

It’s important to note how well PJ shoot’s on guarded shots because there is another dynamic to him as an off-ball player when he can get his shot off with little time, with little repercussions. He’s a greater threat, his man is going to be punished more often for helping, and he’s ultimately going to create more space than your average shooter.

People who are smarter than me have pointed to the correlation between the three ball translating and touch for a while now.

PJ has a niche for getting offensive rebounds:

And lastly, PJ is a willing and able floor runner:

PJ is a switchable player. I think his switch range is around 3.5-4.5 where he can guard some 3s except the faster more twitchy guys, and I think he can guard most bigs excluding yours Embiids, Jokics, and KATs etc.

Here’s a clip of PJ opening his hips to slide with Nassir Little and finishing with a great contest on the shot:

Jordan Nwora turns the corner with his first step but a great recovery and contest by PJ using his speed and length:

PJ is a smart help-defender with good blocking instincts. He posted a 4.8% block percentage his sophomore year.

This one is just cruel:

Here is a thread by Brian Geisinger with some great clips from the preseason game that show off PJ’s off-ball instincts in particular:

Now, PJ is not really a shot creator. He is an excellent post player and that can be used at the end of shot clock as an escape valve. PJ has some potential to attack the basket from the perimeter due to his handle, strength, touch, and body control. However, for the most part he plays off of other players, ideally a creator. And as a role player PJ can do just about anything you need him to.

PJ spaces the floor better than most due to his ability to knock down more contested shots. You don’t want to close out to hard due to his ability to finish driving to the rim. You never want to switch smaller defenders on to PJ due to his post play and finishing ability. You don’t want PJ rolling to the basket he has great hands, elite touch, and can absorb contact and finish. You can’t force PJ in short roll cause he can shoot, he has the touch to shoot floaters, he can drive, he has the intelligence to find weak spots in the defense, and he has every pass in his arsenal.

Now, on defense PJ is also pretty clean. PJ can bang down low unless we’re talking about your elite bigs and then again how many fours can? He can switch unto plenty of wings, excluding of course your quicker and more twitchy athletes who are again, mismatches for most fours. PJ is a very smart off-ball defender who makes good plays that include weak side blocks, steals, and pivotal rotations.

PJ is about as high-end a role player as they come, you need your elite role players just like your creators. Kawhi is really important, but so are Kyle Lowry and Marc Gasol. Steph is amazing, but he needs Klay and Draymond with him. PJ is an elite role player, and for my Hornets fans who want a creator to pair with him we’ll see you in the summer for the 2020 draft.