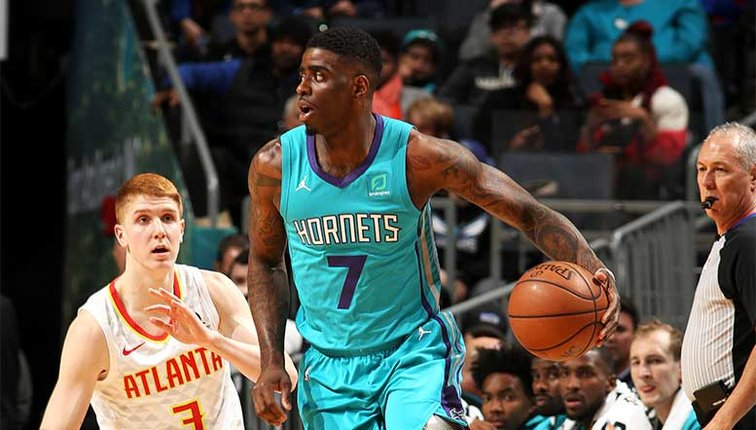 Dwayne Bacon is the best two-way player on the Charlotte Hornets roster. He has size, scoring, and defensive, he is, without question, the most well-rounded player on the Hornets’ roster. While this is indeed a fact, Bacon, who is in a contract year, will still have to prove that he belongs with the Hornets going forward.

Dwayne Bacon has the ability to cement himself as a high-level role player this year. Granted, he will absolutely have to take on more of an offensive role for a Hornets team that, well, doesn’t have much going for it. Charlotte will also rely heavily on Bacon on the defensive end since they also have a lack of perimeter defenders.

Playing a premium position, small forward, Bacon has shown that he can play at any level. From early March to the end of the season (16 games), he averaged 12 points, three rebounds, and two assists while shooting 45% from the field, 40% from three (!!!), and 70% from the free-throw line.

This is obviously a small sample size. But it is promising nonetheless.

Dwayne Bacon could become a perfect role player – even better than Robert Covington who I personally rate very highly. He’s got the athleticism and mentality to thrive in the NBA.

After spending much of his first season in the NBA’s G-League, Bacon improved on his rookie season last year in almost all facets of his game. We should expect the same this year. As he can score at all three levels, it would not be surprising to see him lead the team in scoring this year. Bacon also might be leaned upon when it comes to late-game situations (if there are any, I mean, this team is BAD).

Dwayne Bacon already took Nicolas Batum’s starting position, and this is after Borrego stated often last season that he wanted Batum to be more aggressive. He is only going to grow more.

This being a contract year for Bacon means he could earn a massive payday – but will be a restricted free agent this summer. Any contract offered by another team could be matched by the Hornets, assuming they extend a qualifying offer.

It will be interesting to see just how head coach James Borrego decides to use Dwayne Bacon. With his growth on both sides of the ball paired with his willingness to learn/accept a role, his value as an asset for this team moving forward is tremendous.

I feel as if I wouldn’t be doing Bacon justice if I didn’t note his rap career.

I expect Dwayne Bacon to take another jump in his career. What exactly that jump is has yet to be determined.

The Queen’s Guard officially stans Dwayne Bacon in every way (with the exclusion of his music).