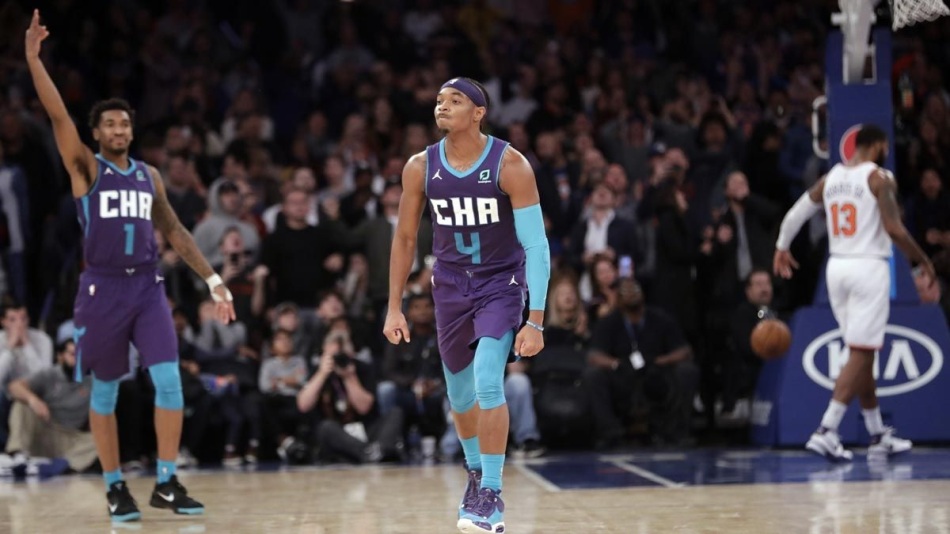 I’ve long been on the record of thinking that Devonte’ Graham would be a high-end back-up in the NBA. But with this recent start, we might have to start thinking of Graham as our point guard of the future. He’s had an incredible start to the season and it’s starting to look like a lot of this might be sustainable. Let’s dive into how he’s looked so far this season.

After averaging less than five points and three assists a game last year, Graham’s numbers have taken a crazy jump to 18 points a game & a little over seven assists a game. He’s always been a great passer so the jump in assists makes sense with more minutes but the scoring has been a bit of a surprise. Te’ shot it really well from 3 in college so I expected his three point percentage to regress up but I wasn’t expecting this type of shooting:

Reminds us Hornets fans of a certain someone doesn’t it? I think it was really good for the development of Devonte’ that he was able to play behind a guy like Kemba (and Tony Parker) last year and learn about being a great point guard in this league. Te’s three point shooting ability turns him from a high end back-up to a quality starter. He’s shooting 40.5% on pull-up threes on over five attempts a game. We’ve seen with guys like Stephen Curry, James Harden, and Damian Lillard, how important the pull-up three can be and how it can open up so much for your offense. Devonte’ isn’t them obviously but his ability to rain fire from three has him approximating some of that value.

Devonte’ is also a terrific passer. He can make all the reads and can get real creative with it:

In this play, you can see his IQ as he knows that they can go 2 for 1 here. He goes quick and draws the help and makes a beautiful pass to make it easy for Bismack Biyombo. Te’ constantly makes plays like these. Look at this montage from Chicago Bulls game:

Again, Devonte’ has all the passes in his bag. This mix of his pull-up shooting and passing makes him an incredible pick and roll threat. He’s in the 76th percentile as the pick & roll ball-handler and has an eFG% of 60%. The pick and roll offense of Te’ props up the entirety of the Hornet offense. According to basketball reference, when Devonte’ is on the floor, the Hornets have an offensive rating of 109.9. When Devonte’ is off the floor, this torpedoes all the way down to an offensive rating of 97.9 (!!!). That’s a difference of over 12 points per 100 possessions. Devonte’ has been just about all of the Hornets offense so far this year.

Te’ has some value on the defensive end too. The advanced metrics don’t love him because he isn’t a big steals or blocks guy, but his awareness is really valuable. Devonte’ isn’t really a play-maker on defense but he’s always in the right spot and won’t hurt you because of defensive lapses.

This doesn’t show up on the stat sheet but he’s really good at rotating and can legitimately blow up plays.

Here again is more good defensive work. Makes a seamless transition to move to the right offensive player and causes a near turnover here. I don’t think I mind calling Devonte’ a good defender for his size. He’s not going to be good at the POA and his size can defintely be taken advantage of but I think because of his IQ and awareness he can be at least a net neutral on the defensive end. Additionally, I think Borrego’s tendency to trap pick and rolls hurts the team which can explain some of his bad defensive metrics. Mix this neutral defense with his positive offense and Devonte’ looks like a starter to me.

What does this mean for us long-term? If we get a top pick this year (I think we will), it makes me think that we should prioritize a bigger guard to pair with Devonte’. I don’t think Devonte’ can handle carrying a whole offense. He isn’t a good finisher at the rim and I think his lack of size really hurts him there. But paired with another initiator type, I think he could be really good. He can still run some P&Rs a game, his passing will translate in a secondary role, and the guy is good on catch and shoots. So far this year, he’s shooting 42.9% off the catch from three on over three attempts a game. He can shoot off-movement as well:

On defense, the bigger guard that we pair him with can take the better guard assignment and Devonte’ can be utilized to chase shooters on screens and be good in team defense.

Draft guys on the TL have players like Cole Anthony & Anthony Edwards at the top of the list. Being that they are seemingly close as prospects, as of right now, I would lean towards Edwards because of the cleaner fit. He fits the bill as a guy that can guard the better guard on defense and can be an initiator on offense. With Devonte’, he wouldn’t have to shoulder the full offensive load and there’d be opportunities for him to get easy buckets because of Te’s passing.

The Hornets front office have a hit with Devonte’. His three best skills (passing, three point shooting, and team defense) are extremely valuable in today’s NBA and makes him project as a quality starter. The Hornets are 6-11 but we do have some nice young pieces which bodes well for our future.