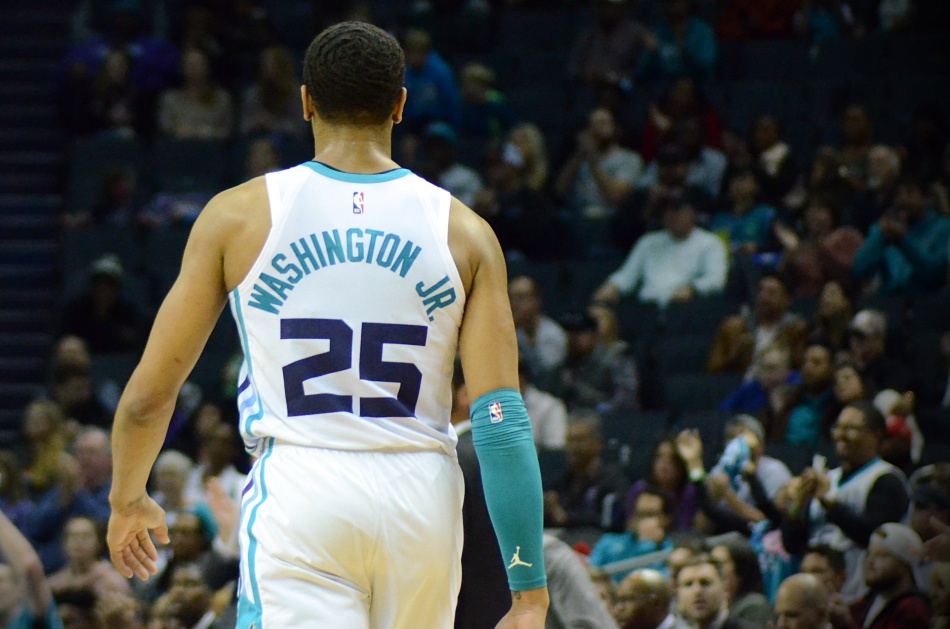 A lot of fans weren’t happy about the Hornets taking PJ Washington because they felt it wasn’t a “sexy” pick. PJ doesn’t have the potential to average 30 points a game sure but it’s not like anyone else at that pick position did either. What he is though, is a very versatile forward that has been incredible for the Hornets so far this year.

PJ is having a pretty special shooting season. He’s shooting over 42% from 3 on over three attempts a game and has a sparkling true shooting percentage of 59%. He is terrific from the corners, over 54%, but his ability to shoot from above the break (37.5% on 56 attempts) sets him apart. Having a big who can shoot from there provides extra spacing for everyone else from the court.

PJ made 7 threes in his first NBA game. Teams have definitely taken notice and now recognize him as a legit threat from behind the arc. The reputation that he is developing is key for our guards who are trying to get to the basket. PJ’s quick trigger is key too:

Spacing in the NBA is as much about the reputation that the player has as a shooter as the percentage that a player is shooting. If opposing players view a guy as shooter, they’ll pay attention to the guy no matter what the percentage maybe. With his quick trigger, PJ is developing a reputation as a guy that’ll let if fly. Teams pay attention to that.

PJ is also really good at the rim. He’s good as the roll man in P&R and is bouncy enough to be a lob threat:

Even without space, PJ can finish. He’s really strong and has great touch:

Overall, PJ shoots over 71% from 0-3 feet out. He’s a terrific offensive big. Can shoot in the corners and above the break. Can pick & pop and pick & roll. He has shown some potential in attack closeouts as well and with his great finishing and shooting ability, that’ll be a great big. He’s as good as it gets when you’re looking for a guy to put next to a star on the offensive end. He also has some self-creation game as well. He scores 1.08 points per possession on post-ups which is in the 82nd percentile. He simply knows how to put the ball in the basket.

It’s important to have as many high-level decision makers on the court as you can. Primary initiators start to get trapped when they get hot and a guy like PJ can help to alleviate that pressure. Would’ve loved to see PJ with Kemba 😦 . PJ is a really good passer as a big. He can serve as an outlet for initiators and makes terrific decisions. Look at these passing chops:

The last one is as good as it gets. I mean when you have a big that can make no-look passes, you truly have something special. Add this to his shooting ability and you have the potential of an awesome offensive player. His value will only skyrocket once the players around him get better.

PJ isn’t really a true switch-guy and struggles sometimes with quick guards. Watch Musa get by him here:

You can see here that sometimes he gets stood up and smaller guys can go by him. However, he does hold-up well enough and can stay pretty well with wings and bigs because of his strength:

This will be really good to see because PJ struggled with Eric Paschall in their matchup before. PJ’s constantly learning and adjusting and that’s great to see and showcases his high IQ. Again, I wouldn’t want PJ out on an island with Steph Curry or anything but he’s capable and can matchup really well 3-4 and even some fives because of his strength.

This is where PJ truly shines. His instincts are terrific. His rotations are always there:

PJ has really good anticipation skills. While watching this week, I saw a couple plays where I thought “hey, maybe that was his fault” but every time on rewatch, he’s consistently in the right position. At the four, it’s really important to have a good back-line defender that can recognize what the offense is doing and make the right read. PJ is doing that already as a rookie. Just imagine when PJ is in his prime. He’s going to be an incredible defender and is already a positive on that end of the floor during his rookie year.

PJ is just so cerebral and so versatile as a player. The Hornets really got a gem and PJ’s on track to outperform his draft position. He also should be in the thick of the rookie race. Guys like Ja Morant and Tyler Herro have the highlights of course and have been good. However, neither of them can match the two-way impact that PJ has.

PJ is third in PIPM among all rookies & first in Wins Added so far this season (per bball index). Catch all’s like that aren’t the end all be all, but they matchup with what you see on the court. PJ has consistently impacted winning on both ends of the floor and without bias would be my rookie of the year at this point in the season.

0 comments on “PJ Washington: Rookie of the Year?”