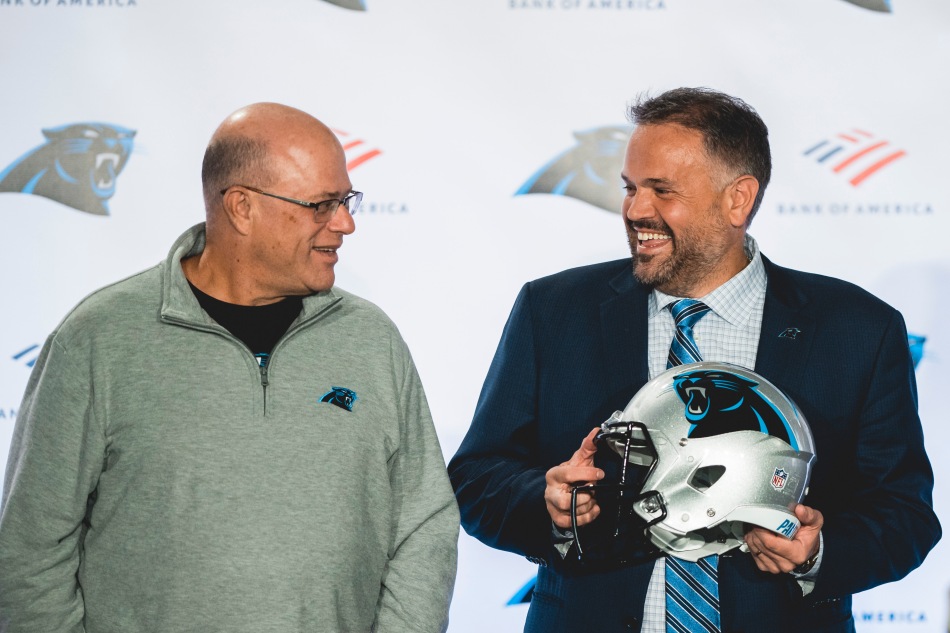 I’m an infant when it comes to the depths of my Charlotte sports fandom. This is my second year with the Hornets, and the season that just wrapped was my first with the Panthers. I have essentially been welcomed to each organization the same way: with a new coaching staff. The Hornets hired James Borrego and the Panthers now famously gave the keys to Matt Rhule (7 years $60 million).

I’ve seen a lot of press conferences in my history as a sports fan. I’ve even been part of them during my brief stint with the Cleveland Cavaliers. However, I have never seen someone — rule — an opening press conference the way that Matt Rhule did on Wednesday afternoon. Let’s get into the play by play.

The presser was hosted at the new practice bubble. Simply put, it was a damn party. Media members, staff, and even fans (shoutout to Roaring Riot) were in attendance. There was also a DJ??? Most press conferences are very strong in demeanor, but this one was a feel good vibe. It was like when you and your boys all pull up to the crib at the same time and everyone is dapping each other up.

The Panthers put together a brief video of Coach Rhule’s journey to Carolina that ultimately would set the tone for the presser. Passionate and motivated. When Rhule finally stepped up to the podium, he was greeted with chants of “Keep Pounding,” which would soon become a theme.

This man damn near starts his speech with, “I promise you (the Tepper’s) each day that I will work each day with everything I have and will make you proud of your organization.” Matt Rhule or 2008 Tim Tebow? He then adds a bit later, “There’s no doubt we share a common vision. There’s no doubt we believe in doing things the right way.”

Rhule then transitions into why the Carolina Panthers. In a brilliant two minute monologue he encapsulated his love for the game and how it has allowed him to achieve so much. Ultimately, he ended it his soliloquy with, “I wanted to be part of the greatest game at the highest stage. I just had to figure out where.” Are you ready to run through a wall yet?

So you still need more convincing, huh? Coach then begins to praise former Panthers’ legends, “I’m so excited to be part of this team. I’m walking in and I saw Steve Smith. I’m sitting there saying to myself, ‘My goodness. The people who have come before me. The greatness.’ I met Julius Peppers earlier — like, Julius Peppers!” Matt Rhule is someone who is clearly so gracious about people who paved the way before him and aspires to be the next person who carries the torch.

“Everything counts. Everything is important. The way I park my car in the morning, the way I walk to the practice field, the way I watch tape. Everything I do, everything our players do… everything has to be our best each and every day.” *insert a thousand fire emojis here*

He just… gets it. Leadership is never given it is earned. Cheesy, but true. We’re looking at a guy who successfully rebuilt two collegiate programs within two years at each. Someone who embraces challenge, and someone who understands the effort and attention to detail it takes to not only win, but sustain a winning culture.

I could continue with quotes, but instead I’d like to end with my favorite. During his final dismount Rhule said, “‘Keep Pounding’ isn’t just a slogan, it’s a way of life.” Right then I knew we did it. We found our guy.

PS: After the presser it was reported that Rhule is leaving the smock in Waco. This is the only blemish on the day.

0 comments on “How Matt Rhule Ruled His Panthers Press Conference”