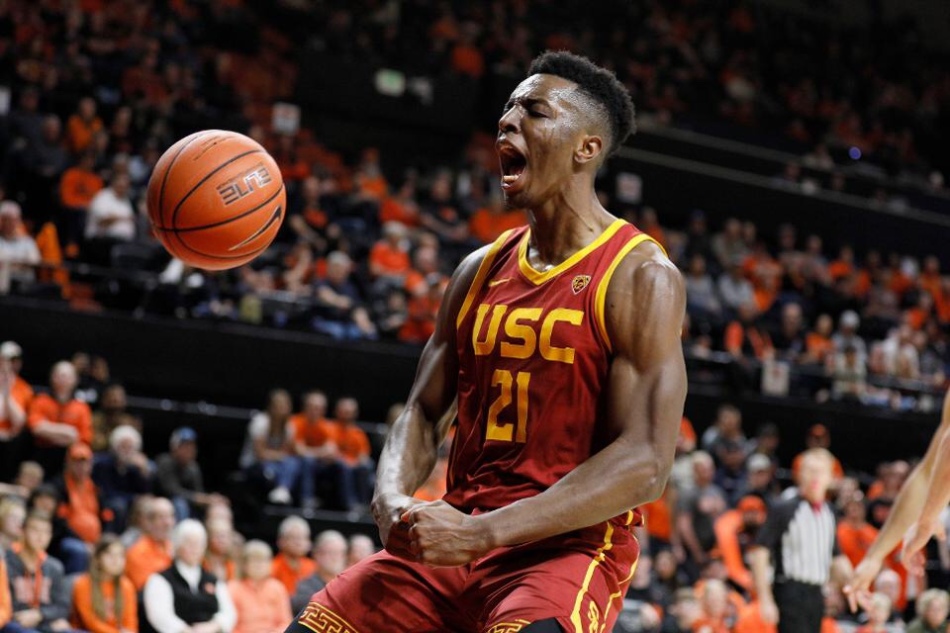 It’s not up for debate, Onyeka Okongwu is the best center prospect in this years class. He possesses the skills necessary to be an effective 5 not only during the regular season but during the playoffs as well. Let’s dive into why he is good and how he’ll translate with the Hornets.

During the college season, Okongwu was a very effective offensive player. He was able to average over 16 points a game on 61.6% shooting. On offense, his four main play types were post-ups, putbacks, cuts, and as the P&R roll man. I’ll talk about the most important three (imo) for his NBA protection.

While at USC, Okongwu posted up for 102 possessions and was able to score 1.127 points per possession which was in the 94th percentile in the country. That’s pretty significant and on good volume as well. Okongwu isn’t going to be the next Embiid but his success as a post-up threat in college leads me to believe that he’ll be able to punish mismatches in the league.

USC ran this little rub screen every game to get Okongwu an advantageous post-up and he usually delivered:

Fronting didn’t work to stop Okongwu either. He finishes through contact here:

These plays aren’t overly complicated and it isn’t like Okongwu has this advanced footwork but it is another weapon in his arsenal. We’ve seen in the league the past years that some P&R bigs aren’t able to post-up mismatches which makes it easier for teams to just switch the action. With Okongwu, I think it is a good bet to make that he’ll be able to punish those mismatches with his strength and touch.

The Hornets were third in the league in offensive rebounding but only 11th in second chance points. Okongwu would help here as he is such a good play finisher.

This will be Okongwu’s bread & butter in the NBA. He’s in that Clint Capela & Jarrett Allen mold. With Devonte’s wizardry as a passer, Okongwu will thrive as a diver in the P&R. While at USC, Okongwu was in the 78 percentile as a roll man.

Okongwu is a terrific vertical athlete and can catch in traffic as well:

Give him some space on the catch and he’ll make you pay too:

Not only does Okongwu score for himself in P&R but he has really great gravity as a roller that will help his teammates get open looks:

The Hornets have some pretty good shooters and with Okongwu in the mix, it’ll only help them to get better looks.

Okongwu has some passing feel as well. He’s no Jokic but he can find the open man:

This is probably my favorite pass from Okongwu. Such a good find:

Don’t ask Okongwu to dribble too much outside of one or two dribbles but he has such a great set of skills. He’s not going to be a star level offensive player as a big (there are only a few) but the skills that he brings to the table are very intriguing. He brings Capela’s roll gravity with actual passing feel and potential to post mismatches. Okongwu isn’t going to shoot but that doesn’t matter as much to me because he’s so good as a roll guy and offensive rebounder. You want him more around the rim anyways. Additionally, with a floor spacing 4 like PJ Washington, the fit is like a glove.

I love Okongwu’s collection of offensive skills but the defensive end is where he truly shines. Okongwu was 10th in the NCAA in defensive box plus/minus. His rim protection is his best trait (9.8% block percentage) but he can fit into a variety of schemes. Watch him hedge and recover:

Okongwu hedges out to impede the defender’s progress but has the movement skills to get back to his own man for block.

Again, Okongwu stops the defender and recovers and just swallows up his man for the block.

Okongwu can guard in drop coverage as well:

Stays between both the ball-handler and the roller and disrupts the lob easily.

The shot blocking is Okongwu’s best trait though:

Okongwu ran the full court to get this block:

I mean look at this versatility. Stonewalls the post-up and stays with Oregon guard Payton Pritchard on the switch to get the block:

Okongwu can be legitimately terrifying on the defensive end. His weakest point as a defender probably is his post defense but it’s not like he’s bad at it, he’s just too small to guard guys like Jokic, KAT, or Embiid. Being that most bigs are unable to guard those guys I don’t see it as too big of a problem. Additional , with bigs it is a lot easier to deny them the ball in the playoffs especially. You can always get a bench big that is huge that can take those assignments at times.

Okongwu is easily the best defensive big prospect and it fills a huge need for the Hornets. The Hornets need a lot (lol) but defense was a huge problem last year (25th in defensive rating) and Okongwu would help them set an identity. With guys like PJ Washington and Cody Martin improving, adding in Okongwu would give the Hornets a really good defensive foundation.

Onyeka Okongwu is a prospect with few concerning weaknesses and fills a big need for the Hornets. Cody Zeller is a good defensive big but he just doesn’t bring the versatility that Okongwu can bring to the table. On offense, Okongwu brings that lob gravity that the Hornets haven’t really had which will open the floor for the shooters. Te’/Okongwu pick & roll with Miles, Terry Rozier, and PJ spotting is a really solid offensive foundation. All three of those guys can attack close outs when the ball is kicked out and have enough passing feel to make the next pass. Te’ can find all open guys and Okongwu can finish and find the open man as well.

We’re projected around the 7-10 pick and depending on how the board shakes out Okongwu will probably be one of the best options at the spot. While the Hornets will lack that offensive centerpiece, the Hornets will put themselves in a good position to have a great foundation for the future. Get lucky in the 2021 lottery and the Hornets could be looking at a pretty quick turnaround.